I watched 2 movies a few days ago. Since I watched them in the same day, I guess I’ll share them in the same post, too (^_^) We were going to watch bean at 19:30, but only the front seats are available. Watching from front seats is a pain it the a** :p being too close to the screen, your eyes won’t be able to focus on the whole screen, and you’ll also have your neck ache after it. So we decided to watch TMNT instead. Having walked around the mall, I remembered the ticket girl said something about bean played at 22:00, so I asked my girl if she would like to watched it after TMNT, and so we did. 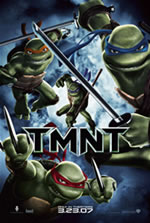 Now let’s on to the first movie, TMNT is the abbreviation of Teenage Mutant Ninja Turtles. I’ve been loving them since I was a kid. I’ve seen the early 2 movies of TMNT which has also been brought to wide screen, but this one use FULL 3D animation. The movie started with a short introduce to TMNT. It also told that Shredder is dead, and Leonardo was sent to a training deep in the jungle.

~ Before reading ahead, please notice that I might spoil some of the good part here ~

I don’t expect too much from this movie, I only wanna experience a bit of the good old days :p Back to the movie, the 3D was cool! the story was nice, but the fight scene wasn’t satifying enough. The BEST one was Leo vs Raph. I was hoping to see a great teamwork when they fought the Final Boss. But the fight ended too soon and too easy. How could the turtles which couldn’t even defeat the 1st monster fought equally with those stone creatures which could defeated the 13 monsters easily. I wish they’ll do something about it in the next TMNT (i believe they’re making one). And the whole movie was too short. It played in less than 90 minutes. And they don’t even have the original TMNT soundtrack (this one could really bring back the moment). I guess I’ll give it a 3 point of 5. Wait, still there are a few things we can learn from this movie:

Well, after having some toughts, I decide to have Bean on my next post (^_^)