Why is it so hard for me to have a Broadband Internet Access at my home? And I thought Jakarta was a Modern City. 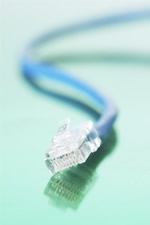 Some people might be lucky by living in an area covered by cable TV. Well, I used to be that lucky. They offered unlimited access to the Internet for a flat monthly charge. I can’t say it was cheap, but it’s well worthed (of course considering my unlimited usage :p). Wait a minute! Did I say unlimited access? of course I did. You see, some marketing tricks used to say it as unlimited bandwith, but hey! There is no such things. Even they gotta pay for their bandwith, so why should they offer unlimited bandwith for their customer? hm…, unless they’re that desperate for some customers (^_^)

Anyway, that’s not the subject I like to share today. Back to my quest, Searching for a Broadband Internet Access, I tried to avoid using ADSL provided by Speedy (Telkom). I’ve heard too many not so nice to hear stories about it. So what comes next was using wireless connection, which has became somewhat popular for new cc in town. I googled the net for it and found some vendors. Most of them doesn’t reach my area, but I found 2 which does. So I contacted both and they came for an on-site survey. The result? You don’t wanna hear it. But it’s not the result that annoyed me, it’s how they treat me. They never give feedback if I didn’t ask, and they hang me by the we’ll call you later for next procedure stuff. Well I haven’t heard a single word from them ’till now.

Since the need was very urgent (I need it to have my works done well), I guess the only alternative I had left is speedy. “So be it”, I said to myself in dark background aura. I called them and sign up for a registration. Their marketing staff came to collect the required documents in the same day. The tech guy came 2 days (working day) after it to configure the modem.

I bought the ADSL Modem at Mangga Dua (IT Shop Center). It’s D-Link DSL-2640T, it has 4 Ports and support Wifi G 54. I really need the wifi support so I can have access to internet anywhere in the house. I have a PC connected to the modem through ethernet, and 2 Laptop (mine n my sis’) connected through wifi. It’s great that the Modem can be used as a switch and access point even without the ADSL connection.

FINALLY ONLINE! Today, I finally have my broadband connection. I can’t say I’m satisfied with it. I have a skype voice call today, and It dropped a few times. I also missed a few seconds of the conversation sometimes (not so often though). I guess I’ll have more to share after we’ve spent more time together (^_^) let’s see how accurate is the not so nice to hear stories.

One thought on “Finally Online”