Whoa… It’s getting harder finding some spare time to update my blog (^_^) corner goal? nah.. it’s not about real football. It’s Pro Evolution Soccer!! The Official English Version of Winning Eleven, a football game developed by Konami. It has been released to many platformsl like PS, PS2, XBOX and thanx God… the PC version (“,) 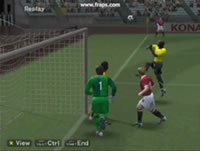 This is my 1st corner goal (a direct goal from a corner kick) saved a few months ago when I play with dewa. I was using Manchester United when I made this goal, and dewa was using Arsenal. Ryan Giggs is the man who take the corner kick, he has great curve. The first time I used MU and had Giggs take the corner kick, I tried to pass the kick inside the box with a bit curve, but it ended up curving so wide flying out of the field. It gave me the thought to try to kick it directly to the goal, and it took me several corner kicks before I finally made one.

Anyway, read more and see the Flash Video Streaming I’ve created. If you want to know how I captured the goal and create the streaming if Flash, well… I’ll share it later (^_^) so be sure to come and visit my blog again.