What Makes a Hero

We (me n uly) have just completed the 1st season of Heroes last sunday. I really recommend this series. But I need to warn you, be very careful, it’s addictive you might not survive (^_^) We’re dying for the next season. Four thumbs up to Tim Kring and his team. 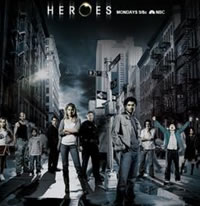 Watching this series has given me a strange thought that the World needs heroes. And I’m sure it really does. Can anyone explain why heroic stories has always been a great topic to be brought up? Children like watching it on cartoon TV shows, teenagers are crazy about the comics, and adults are queuing in front of the movie ticket windows. Everyone love heroic themes, and I say, It’s because they need heroes, we need heroes, the world needs heroes. But that’s not all, there’s one other thought which is beyond it: We want to be heroes. Perhaps not everyone realize this, but there’s an urge inside everyone to become a hero.

So what makes a hero? Tell me something, which hero do you want to become the most? Superman? Spiderman? one of the X-men? or one of the Japanese manga/anime heroes? Why? Do you like their super power? Do you think it’s cool? To have the amazing abilities and help others in need. I’m sure it’ll be cool. But back to my 1st question, does it make you a hero? What make you so sure you’ll never misuse your power for your own benefit? To earn money and fame, hurt people you dislike or fulfill many things you’ve desired all this time. Perhaps, when you received the extra ordinary abilities, you’ll turn to someone else, to a personality you’ve kept hidden inside you, become a villain instead of hero. Here’s a great quote from one of the episode:

I understand, Father. To save what is most important, I must be strong enough, to cut out my heart — Hiro (to Kaito)

So what makes a hero?

One thought on “What Makes a Hero”