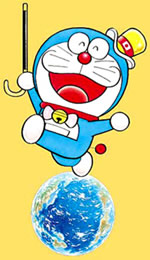 Hi, I just want to share what I just found out about this legendary anime/manga, Doraemon. I’m sure this might be old news for some of you. Well, a few weeks ago a friend of mine set his mesengger status to “doraemon tamat” with link on it. I was very curious, and it only took some minutes until I decided to click on it. Doraemon is one of the greatest story in my life, and I believe it’s also one of the greatest of all time throughout the world. But I never heard about an ending of this story before. That’s why the statement and the link really stole my attention.

Clicking the link led me to a forum which share images of a translated comic (it’s in Bahasa). I read it page by page, and WoW, I was tottaly amazed, It’s a very great ending from a very great story. Then, some things bothered me. Some of the image quality isn’t as good as usual, and the comic block is too rigid. So I started to google around. Well, I found out in most forums, many people believe that this is the last episode of doraemon, and some even question why it has never been published here in Indonesia, and worst, some even blame that the publisher do it on purpose.

Like I said, I’m here to share what I know. Doraemon is created by a very talented manga artist Hiroshi Fujimoto or whom we know as Fujiko F Fujio. A bit detail about this mangaka, there use to be Fujio Fujio, the pen name of the great mangaka duo, Fujimoto and Motoo Abiko. They started their career as mangaka together. After some time, each of them begin to work at his own manga. Fujimoto then use the name Fujiko F Fujio, and Abiko use the name Fujio Fujio (A).

Back to the topic about Doraemon, there are a few episodes in the series where Doraemon has to return to the future. Actually we could see them as the ending of the story, if they were made as the last episode (^_^) But since the series still continue with more stories, we don’t consider those episodes as endings. And… Fujimoto died before having the chance to decide the ending for Doraemon series. So, Doraemon is considered as series with no ending. But, there are 3 most often quoted urban legends of Doraemon ending. And one of them is the one I read and which you can download at the bottom of this post.

So to make it clear, there are NO official ending of Doraemon Series. The manga you can download below is a doujin, and was translated to Bahasa by someone. However, I personally believe that even Fujimoto Sensei would love this ending 🙂

One thought on “Doraemon – the Last Episode”