Our office just bought a new printer this month. It’s a Samsung Mono Laser Printer ML-2240. Even with toner save mode we didn’t need 1 month to dry down the pre-packed toner (^^) At first I thought it was cool to have the smart panel alerting us that the toner was almost empty. But to keep having this alert even after we refill the toner… hm… It started to become a bit annoying. Well guess what! The worst has yet to come. Shortly, the printer refuse to print at all and the (not so) smart panel keeps alerting us of exhausted toner. 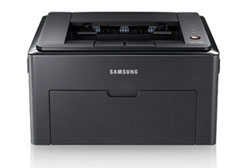 As usual, google was the first thing I did. Sadly, most of the answers of this problem I could found were short circuiting 2 pins of a chip inside the printer. Hell no! I ain’t going to do anything like that to a new printer. Well, I’m not really good at handling such tiny things anyway 😛

But, after some times of struggles, I finally found another solution without disassembling the printer. It said we could reset it by upgrading the printer firmware. Hm, sounds like a very good solution. So the next hunt begins. I searched for the printer firmware everywhere with no luck. The guy in the forum said he downloaded it from Samsung website, but I can’t seem to find it. Another BIG THANKS to google, their cache still keep Samsung page that offer the download. I’m not sure why, but looks like Samsung removed the download link from their website. My guess is it was for the same reason why I was looking for it 😛 hehe

It was very easy to upgrade the firmware with the official software from Samsung. It only took a few minutes. But strangely… nothing was changed. I checked and made sure the firmware is upgraded successfully. I tried to rerun the firmware upgrade again, but it refused to do so because the printer already had the same firmware version. Damn, another dead end.

I don’t really like giving up, so I looked again some of the downloaded files and found a small promising light from a set of files. It turned out that these files can “fix” the firmware and download it to the printer. Hola! All I needed then was the firmware file, because it wasn’t provided. I remembered the application from Samsung was saving this file to a temporary folder. So I run it again, grabbed the firmware file from the temp folder, run the “fix”, downloaded it to printer and… Tara! This time it worked (^^) phew…

Anyway, so much for the story, I don’t know if it’s illegal to supply these files but I uploaded it to my website. Feel free to use it in your own risk, choose either the complete steps / simple steps and download the according file. Whoops, it’s not here, please get the patcher and steps to reset Samsung ML-2240 for refill toner on my next post 🙂

One thought on “Reset Samsung ML-2240 to use Refill Toner”